Official websites use .gov
A .gov website belongs to an official government organization in the United States.

We've recently added two powerful tools to our development workflow that allow us to preview, test, and publish the Standards code more quickly and easily.

Fractal is a powerful and flexible framework for building interactive component libraries. It’s similar to Jekyll (which we use to publish this site) in one key respect: It operates primarily on simple file naming conventions. Organize your files in a specific way, using the content and data formats it understands, and it will generate a web site automatically.

Check out the Standards in Fractal: 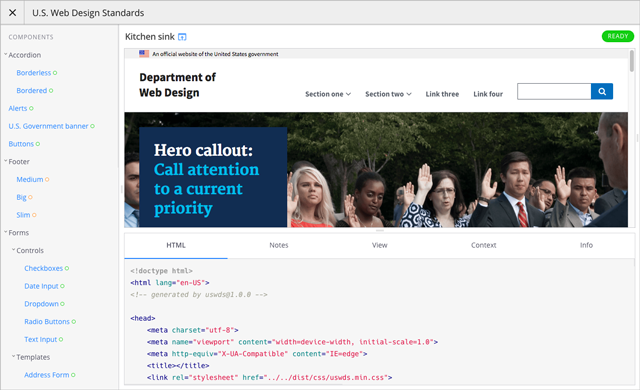 Fractal’s component-oriented architecture nudged us to consider how each of our own components really work: What are their moving parts, and how do their “variants” (for instance, our basic and extended headers) differ from one another? The process of adapting our components to Fractal produced a basic interface inventory, which shows us exactly where we are right now, and the interactive previews give us the confidence to make bigger changes because we can immediately see their impacts on various aspects of the Standards.

Fractal has also made it much simpler to work on the Standards’ CSS, JavaScript, and HTML component templates. Previously, the only “place” we could test our components interactively was on this site, which was tricky to set up: Each person needed to clone both of our repositories, npm link them together, then manually restart the Jekyll server so that it would detect changes to the code. Contrast that with the four commands necessary to get up and running now (assuming you have Node.js version 6 or greater installed):

Now each of us has a powerful development, testing, and documentation tool at our fingertips, which we can use to test every aspect of the Standards code without any of the customizations we’ve made on this site. Fractal even comes with a handy resizable preview window we can use to test the responsiveness of each component or page template without having to resize our entire browser window.

But wait, there’s more! Fractal is an invaluable tool for those of us developing the Standards on our own computers, but what if we put it… on the cloud? That’s where Federalist comes in.

In a nutshell, Federalist is an open source GitHub Pages for government: a platform that automatically builds and publishes static sites whenever we push commits to our GitHub repository. Unlike GitHub Pages, though, Federalist isn’t limited to publishing just static files and Jekyll sites: We can use the same Node.js tools we use to develop the Standards to publish our Fractal component library as a static site on Federalist.

One of Federalist’s most useful features is its ability to publish “branch previews”. Whenever we push commits to a branch on GitHub, Federalist builds a new version of the site and publishes it at a predictable URL. For instance, you can see the current state of our develop branch preview, or you can kick the tires of our forthcoming version 1.1.0 release on the release-1.1.0-pre branch.

Federalist hosts other websites across government and is open for business. If you’re interested in using it to host and preview your own federal static sites, please get in touch with that team!

Equipped with Fractal and Federalist’s automatically published URLs, we can add preview links to each of our GitHub pull requests, and more quickly collect feedback on proposed changes. Whenever we create a new pull request, we can paste the following template at the top and replace {BRANCH} with the pull request branch name:

We can even link directly to individual components, and their standalone previews. These links help us provide more targeted feedback and more quickly address any issues that arise.

Another technique we’re exploring is making versioned assets (the Standards CSS, JavaScript, images, and fonts) more readily accessible for testing on other sites. In fact we’re already doing this with Federalist, which includes the git branch in its preview URLs. This means you can link directly to the JavaScript or CSS from our version 1.1.0 pre-release once you know the URL format:

These URLs will only work for version 1.1.0 and above. You can get the assets from previous releases with unpkg using URLs in this format:

Having these public, predictable URLs make it easier for us to create test cases with “live-coding” tools such as JSFiddle and CodePen. We used JSFiddle to create a live test case for this accordion bug that references the JavaScript from a branch to demonstrate the proposed fix. In this case, the reporter of the issue was able to download that same script and confirm the fix on their project!

We’re working on a reorganization of this site that will incorporate Fractal’s standalone component previews and code samples so we don’t have to maintain them in two different places. We’re also exploring the possibility of enabling live editing capabilities in Fractal so that we can more quickly create and share test cases for each of our components. We’ve also got more work to do on fully porting our old component templates over to Fractal and better organizing our components, variants, page templates, and related documentation.

If you have a suggestion, see something amiss, or just want to say hi, feel free to file an issue on GitHub, email our mailing list, or join our public Slack channel.